Madonna's "Live to Tell" song is from her third studio album True Blue (1986). Originally composed by Patrick Leonard for the score of the film Fire with Fire, the song was shown to Madonna, who decided to use it for then-husband Sean Penn's film At Close Range. Madonna wrote the song's lyrics and co-produced it with Leonard. The song was released as the lead single from True Blue on March 26, 1986 by Sire Records. It later appeared on compilation albums The Immaculate Collection (1990), Something to Remember (1995), and Celebration (2009).
A pop ballad, the song includes instrumentation from guitars, keyboards, drums and a synthesizer, and its lyrics deal with deceit, mistrust and childhood scars. It is also about being strong, which Madonna recalled in an interview that she thought about her relationship with her parents, while writing the lyrics.
The music video, directed by James Foley, shows Madonna's first image makeover, featuring her with a cleaner look, shoulder-length wavy golden blond hair, conservative wardrobe and subtle make-up. This toned down blond appearance was again inspired by Marilyn Monroe.
"Live to Tell" was generally well received by music critics, who frequently referred to it as the best ballad of her career. It was also a commercial success, becoming Madonna's third number-one single on the Billboard Hot 100 and her first number-one on the Adult Contemporary chart. The song faced controversy when Madonna performed it on her 2006 Confessions Tour wearing a crown of thorns while hanging on a giant mirrored cross. The performance at Rome's Olympic Stadium was condemned as an act of hostility toward the Roman Catholic Church by religious leaders. 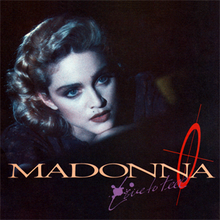