Madonna caused quite a stir on campus when she visited the University of Michigan with her daughter on Wednesday. 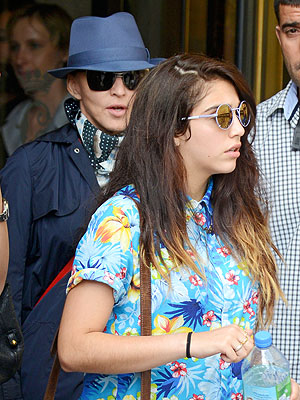 "There was a lot of excitement," Lindsey Meekhof, a vocal performance senior there, tells PEOPLE.

"[Madonna's] daughter was learning about our musical theater program," Meekhof added. "Someone announced to my choir class Madonna was in the building, and choir wasn't productive anymore after that."

Dressed in black and wearing oversized sunglasses, the pop icon was apparently trying to go incognito as she exited the dean's office at the music school with her daughter, 17.

Word spread quickly among students as Madonna and Lourdes – who reportedly played the role of Rizzo in her high school production of Grease – toured North Campus with a musical theater major and ate lunch at one of the residence halls.

"People that weren't music school students were all over the area," Meekhof said of the department located away from the university's central campus. "Madonna tried to keep the attention on her daughter but ... people were everywhere."

Madonna, who briefly studied at Michigan before leaving to pursue her career in New York, has made it clear that the university is at the top of her list for Lourdes.

"I want my daughter to go to school there," Madonna told the NFL Network in an interview before her Super Bowl XLVI halftime performance in 2012. "I keep telling her, Ann Arbor is an awesome place."

A rep for Madonna had no comment on the college visit.

wow she's all grown up