The Virgin Tour was Madonna's debut concert tour. The tour supported her first two studio albums, Madonna (1983) and Like a Virgin (1984). Although initially planned for an international audience, the tour was restricted to the United States and Canada. Warner decided to send Madonna on tour after Like a Virgin became a success. After an official announcement on March 15, 1985, Madonna and her team began production plans. She wanted the tour to be a reflection of her own self and collaborated with designer Maripol for the costumes.
Beastie Boys were signed as the opening act, while record producer Patrick Leonard was the music director. "At first I said, 'The girl in the underwear? Gedoudahere!'" he recalled in 1992. "But then I met her and she was just this vicious thing. You know, right in your face with, 'This is what I need. The tour's three months long. Whaddo I know about a band? You do it.' So I said okay."
The stage was triangular and included ramps around it, with lighting arrangements hanging about 30 feet above. Four giant screens lined three sides of the stage's outer perimeter. The set list consisted of songs from Madonna and Like a Virgin. Madonna was backed by two dancers as she moved energetically across the stage. The show ended with her in a wedding dress, performing "Like a Virgin" and "Material Girl".
The tour received a mixed reception from critics, but was a commercial success. As soon as it was announced, tickets were sold everywhere. Macy's New York department store was flooded with buyers, who bought tour merchandise ranging from shirts and sunglasses to crucifix earrings and fingerless gloves. On its end, the tour was reported to have grossed over $5 million ($11.13 million in 2017 dollars), with Billboard Boxscore reporting a gross of $3.3 million ($7.35 million in 2017 dollars).
The tour was recorded and released on VHS, as Madonna Live: The Virgin Tour, which received a gold certification by the Recording Industry Association of America (RIAA). With the commencement of the Virgin Tour, a wide ranging audience—especially young women—thronged to attend, attired in Madonna-inspired clothing. This frenzy regarding Madonna gave rise to a new term called Madonna wannabe—a word that was ultimately officially recognized by the Webster's Dictionary in May 1991. 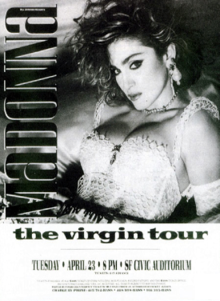