"Vogue" is a song from Madonna's second soundtrack album I'm Breathless (1990). It was released as the first single from the album on March 27, 1990, by Sire Records. Madonna was inspired by vogue dancers and choreographers Jose Gutierez Xtravaganza and Luis Xtravaganza from the Harlem "House Ball" community, the origin of the dance form, and they introduced "Vogueing" to her at the Sound Factory club in New York City. "Vogue" later appeared on her greatest hits compilation albums, The Immaculate Collection (1990) and Celebration (2009).
"Vogue" is an upbeat dance-pop and house song and set the trends of dance music in the 1990s. However, it has strong influences of 1970s disco within its composition. The song also contains a spoken section, in which the singer name-checks various golden-era Hollywood celebrities. Lyrically, the song is about enjoying oneself on the dance floor no matter who one is, and it contains a theme of escapism. Critically, "Vogue" has been met with appreciation ever since its release; reviewers have praised its anthemic nature and listed it as one of the singer's career highlights. Commercially, the song remains one of Madonna's biggest international hits, topping the charts in over 30 countries, including Australia, Canada, Japan, the United Kingdom, and the United States. It became the world's best-selling single of 1990, selling over six million copies.
The music video for "Vogue", directed by David Fincher, was shot in black-and-white and takes stylistic inspiration from the 1920s and 1930s. Madonna and her dancers can be seen voguing to different choreographed moves. The video has been ranked as one of the greatest of all times in different critic lists and polls and won three awards at the 1990 MTV Video Music Awards out of a total of nine nominations.
Madonna has performed the song on six of her tours, at the 1990 MTV Video Music Awards, and at her performance during the halftime show of Super Bowl XLVI. The song has also been covered numerous times by different artists, such as the Chipettes on their album Club Chipmunk: The Dance Mixes; it also featured on the soundtrack of The Devil Wears Prada, as well as in "The Power of Madonna" episode of the Fox show Glee. Writers and critics have noted the video and the song's influence in bringing an underground subculture into mainstream popular culture through the postmodern nature of her power and influence, as well as the way in which it followed a new trend in which dance music enjoyed widespread popularity. 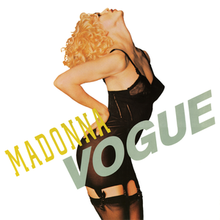